Back to the blog

Another letter from the people behind it 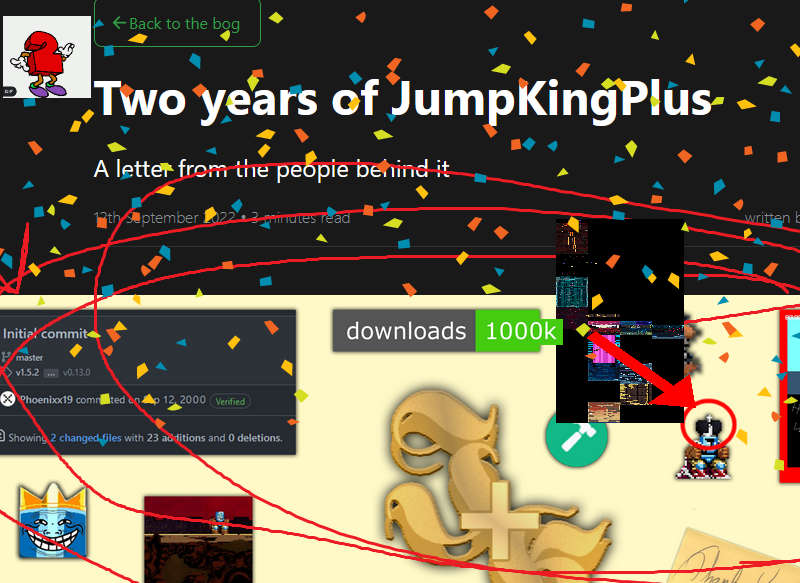 Somehow, another year of JumpKingPlus has passed. Even though my time has been mostly limited because of my final studies, this year has been eventful anyways without any massive updates.

Right after Babe of Ascension’s successful release, the Discord server was flooded by people interested to make their own custom levels and twists of the already existing levels (such as the Mirrored Map or Reverse Babe).

A couple of very detailed maps with new and fun gimmicks started to come around every now and then. Just to name a few: Immortal Babe (the most difficult custom level ever created yet), Babe of the Realms (trippiest level ever made) and Babe of Dimension (the map that made Jump King come back another time).

Despite JumpKingPlus had only two major updates for basically the whole year, both they were very significative for me and for the current state JumpKingPlus was and is right now.

With the popularization of custom maps, not only there were new people making levels, there were also new people interested into modding Jump King. Mods that didn’t integrate into JumpKingPlus but worked nonetheless (such as the Ravens Mod by PhantomBadger or the Coop version of Jump King by sajmonks).

With new mods there where also interest into making new custom blocks, that’s where Ellie came in making new blocks that got featured in the v1.7.0 Block Update version.

Most of these blocks has been used since on every map because of their versability of usage. Ellie has announced that she has been working on a future update that would allow speedrunners to better integrate with JumpKingPlus.

Another mod that has been going around was the multiplayer mode featured inside Skippy’s project, JKCore. Sadly, the Skippy’s project was completely based on a completely different approach of modding, an approach more modern that I wished from the start I had the knownledge to use.

Luckily, for me and the whole JumpKingPlus project, someone by the name of Sahandevs decided to help us out on the journey to create our own version of the multiplayer that fully integrated both Steam and Discord. The multiplayer mod featured in v1.8 helped to make maps fully dedicated for multiplayer such as Battle for the Babe. 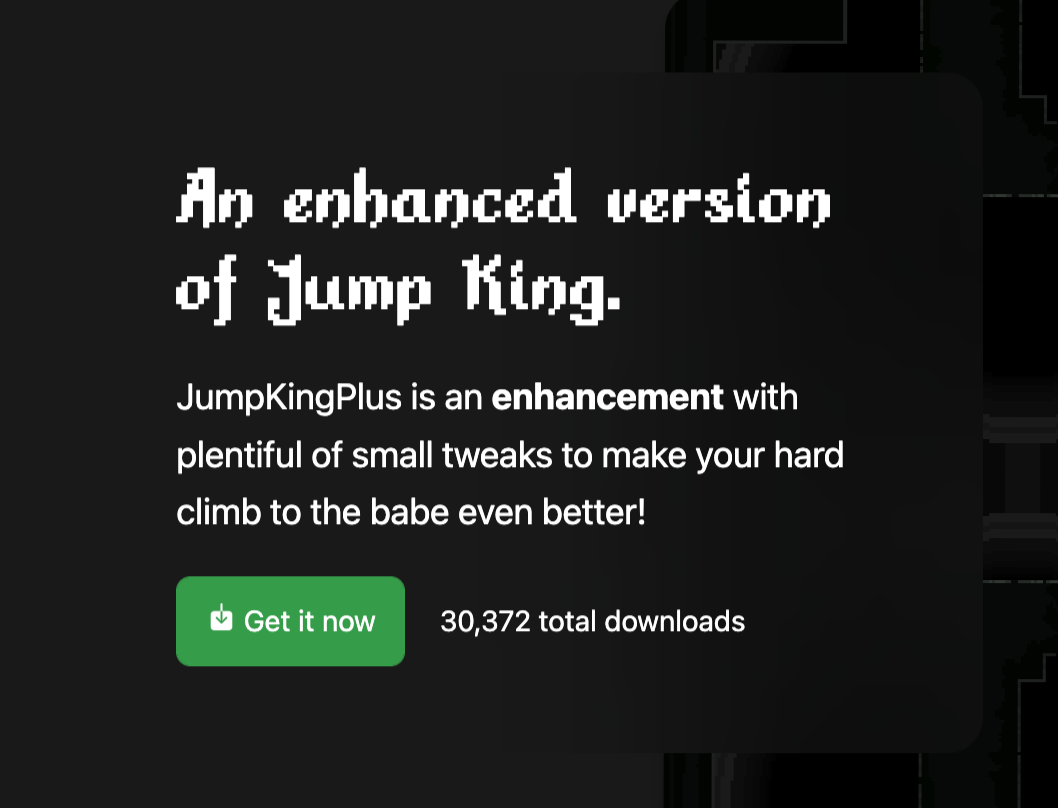 The repository since the addition of Sahandevs, has started to move from a personal repository to an organization repository.

In 12 months, JumpKingPlus managed to triple the previous number of downloads going from a solid 10 thousand to a whopping 30 thousand downloads! Legit crazy.
Words cant really express how thankful I am to each download.

In the past December (2021), I decided to branch out release announcements from my personal Twitter profile to a dedicated account. In less than a year, the account has reached over 100 followers (and overtaken my account Madge).

I have already said enough so don’t really want to speak over the people that though my project created numerous super creative super detailed levels, skins and any other user-generated-content.

The activity in map making speaks for itself, JumpKingPlus is a pillar in the community and we are very thankful it exists.

Big thanks to Phoenixx for creating JumpKingPlus.
He gave people who love creating maps/levels a tool to do that.

Creating a map for Jump King is certainly a very long and difficult process but whenever I had a question or problem Phoenixx was there to help, he also listened to suggestions and wishes of the community which lead us to the JK+ version we have today, an upgraded version of Jump King with many tools to make the life of Jump King enjoyers easier and more exciting. Speedrunners, Map Creators, Content Creators, Jumpers, we all profit from JumpKingPlus and the new content that came along.

It’s the 2nd anniversary now and as of today the map creators are more lively than ever before, its almost like we get news on upcoming maps daily, New names pop out of nowhere to present leaks of their maps with sometimes breathtaking art, sometimes cool animations or just their very own unique style.

There is no end in sight and I’m looking forward to how JumpKingPlus will further unfold and what kind of new ideas future map creators will present to us.

It’s definitely a hard task to make my own custom map.
Very time consuming also hard to think new theme and express it as a Jump King map but I love Jump King so much and wanted to see other people enjoy my map.

If I don’t know what to do and how it works, I can ask it on JK discord. They are kind. They answer as well as they know. and there is good explanation about it on JK+ website. so it’s not that hard to understand how to make it. and the satisfaction of making the map is indescribable.

It was one of the most valuable experiences of my life. I was very happy whenever someone who beat my map told me that your map is awesome/thank you for making good map. In short, it’s worth it! 🙂

Make your own map! Kind JK discord people will help you. including me.

IntroCar (Battle of the Babe creator)

All the new works for custom maps as well as additions to JumpKingPlus has been amazing to see over these 2 years, super proud of everyone for their support and feedback, as well as others for their hard work on custom maps/JumpKingPlus features. Y’all are the best <3

Joe M (Back to the Babe creator)

It’s not often you find a game with a documentation on how to make a custom map as detailed and helpful as the one written by Phoenixx19 on the JK+ website. Without that info there are no skins. There are no custom items. There are no new maps.

With not a single bit of official jump king content released since 2019 (3 years ago), JumpKingPlus and by association Phoenixx19 are the main reason the Jump King community is still alive and well.

JK+ has given me the opportunity over the past 7 months to make a piece of work I am extremely proud of and that will hopefully be enjoyed (or hated) by hundreds of people.

Phoenixx19 and everyone else who worked on jk+ should be incredibly proud of themselves and what they have done for our silly jumping game. Here’s to many more years of JumpKingPlus!

Brunov (speedrunner and supermod for speedrun.com/jumpking)

JK+ has been an enormous help for every speedrunner since its release. So many features have helped speedrunners be more efficient, be able to find new strategies and even make individual level runs possible.

The custom map speedrunning has also been a pleasure to see evolve. From beating maps with no falls to having incredibley optimized runs.The game would absolutely not be the same without it.

Thanks popo (Bruno’s nickname of Phoenixx) and everyone else that has contributed, it means a lot.

anyone involved with JumpKingPlus,
the Jump King Discord community,
GGamer 🚎,
the testers,
the map makers,
the skin makers,
the people modding Jump King with new stuff
and you for reading this.

It means the 🌍 to me that you are still here!